10 Autumn Rituals to Bring in the Equinox

It's the first day of fall, it's Libra season, and it's Bisexual Visiblity Day.

That means that it's time to put on a denim jacket, grab some cinnamon-spiked drinks, and prepare to watch the chaotic heat of summer quickly wither into winter's frigid darkness. Fortunately, the onset of fall means that now we have a great excuse to leave behind the aggressive brightness of the summer months and to retreat into our hibernation caves.

On the other hand, the onset of the colder, darker months can also be a difficult time for mental health (though, of course, so can summer with all its pressures and heat waves)—but the changing seasons is as good a time as any to reinvigorate your self-care routine. So, here's how to ring in the fall while taking care of yourself. 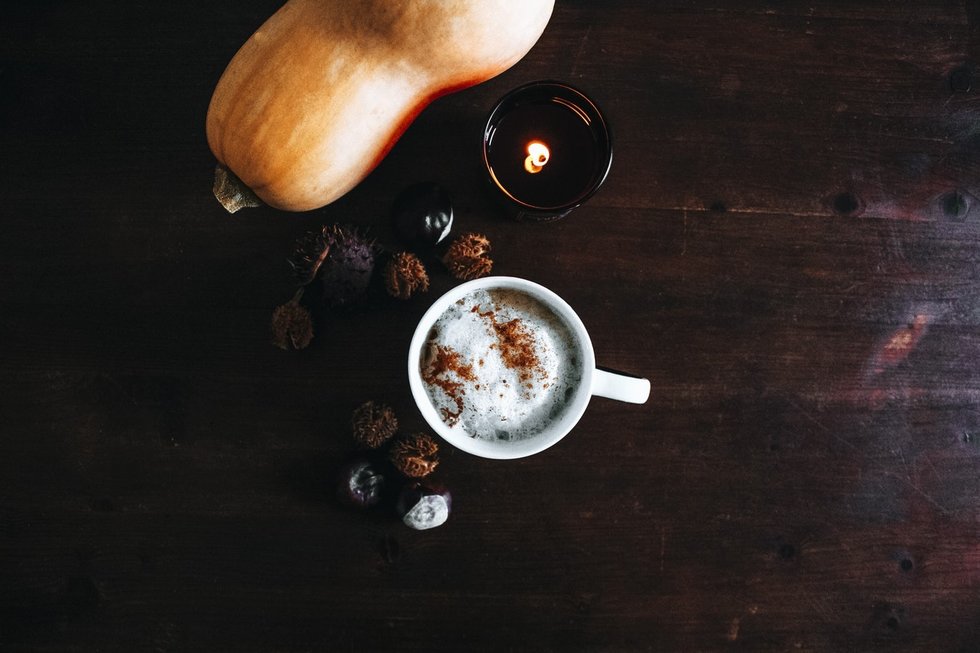 1. Read the story of Demeter and Persephone

In Greek mythology, fall begins when Demeter's daughter Persephone has to return to Hades—so the first day of fall is an ideal time to read the myth, or one of its many beautiful modern interpretations. Anaïs Mitchell's musical Hadestown threads Persephone's story with the tale of Orpheus and Eurydice, and if you haven't listened to the soundtrack, stop what you're doing right now, bookmark this article, and go check it out.

The Persephone myth has been an autumn tradition for a while. It formed the core teachings of ancient, secret rites called the Eleusinian Mysteries, which informed the spiritual basis for many secret societies, and it even seems relevant in our era of climate change (as Persephone's initial disappearance launched a dramatic change in the weather). However you choose to appreciate it, the Persephone and Demeter myth is the definitive story of the autumn equinox.

"Our Lady of the Underground" - Sung by the Cast of Hadestown on Broadwaywww.youtube.com

2. Listen to an autumn-themed playlist

The sight of the changing leaves has always inspired artists to pull out their repertoires of seasonal metaphors, and there are a number of autumn-themed songs that are perfect to listen to as you stroll through the park or gaze out your window at the last of the evening summer sunshine. My personal favorites: Billie Holiday's "Autumn in New York," Neil Young's "Harvest Moon" (or Widowspeak's dreamy cover), and Eva Cassidy's timeless rendition of "Autumn Leaves."

In Paganism, the autumnal equinox is called "Mabon." This day is about the balance between dark and light (fitting for the start of Libra season, which is also about balance).

To create an autumnal altar, try piecing things together that represent balance, like black and white candles or a small set of scales. You can then surround them with pumpkins, gourds, pine cones, dried leaves, white wine, corn, seeds, pomegranates (a tribute to Persephone!) and other fall-themed goods. Jewel tones and golds work, too. You can also incorporate autumnal essential oils like pine, sweetgrass, orange, jasmine, patchouli, oak moss and of course cinnamon, and add gemstones like clear quartz, peridote, diamond, gold, citrine, yellow topaz, cat's eye, and adventurine—though really, a few pumpkins and candles will also do the trick. Just use your intuition.

4. Clean your space and set intentions

Every seasonal transition is an ideal time to clear out the old and make room for the new.

Now is a perfect excuse to do that deep-clean you've been putting off, break off that relationship that's been holding you back, or join that group you've been meaning to. As Shia LaBeouf says, "Don't let your dreams be dreams. DO IT!"

At this transitional time, try delving into your subconscious and journaling it all out. You could make a list of the blessings you've received this year, or reflect on where in life you feel balanced and where you feel out of balance, or write about what you want to let go of, or make an exhaustive list of all the reasons you feel guilty. Just let it all out on paper.

Also, Pinterest has millions of prompts if you're in doubt.

Also, if you're a writer (either by trade or by night), you probably know that fall is the perfect season to pick up a pen. Try writing a scary story or challenging a friend to a ghost story-writing competition, a la Mary Shelley, creating a story about what's really going on in the spooky mansion down the road, or write a hypothetical tale of who you'd haunt if you came back as a ghost. (If it were me, I'd high-tail it to the White House, but that's a story for another time).

Though the general election season isn't coming up for another year, it's very important to vote in your local and statewide elections. Do some research and make sure that you register to vote so you can make your voice heard next November.

7. Pull out the sweaters

As soon as that first crisp, cool day comes around, you know it's time to pull out your most gigantic sweater and disappear into it, never to emerge until June rolls around. Suggestion: Avoid itchy wool. Another pro tip: No matter your gender, sweaters from the men's section tend to be better-made and all-around cozier.

It's going to be tough to do all the fall-related things you used to as a kid, but it's always fun to revisit at least one or two rituals from when you lived in the suburbs instead of Brooklyn (just a guess). You could go apple picking, gather around a bonfire, go on a haunted hayride, carve a pumpkin, jump in a leaf pile, go upstate to see the leaves, marathon horror movies, go camping, get lost in the woods, search for the Blair Witch, join a cult, or whatever it is you remember from the good old days.

Rosé season is over, and now it's time to switch your drink of choice to a rich, oak-toned Merlot (if you're a wine person and know/care what that means). It's also the perfect excuse to host a red wine or apple cider-drinking party, because while it's unfortunately not cold enough to use the weather as an excuse for why you can't go out or see anybody, it is cozy season, and that's reason enough to host a gathering or two from the comfort of your own home. Light tons of candles, get your pumpkins out, throw a horror movie on or tell some scary stories, and enjoy the cinnamon-scented vibes.

If you want to make your own fall drink, try any of these cocktails, or this recipe for hot apple cider (from allrecipes.com):

It's also the first day of Libra season. While astrology (like tarot cards) is always up to interpretation, some stargazers say that Libra season is a time to be social and to nurture community and relationships. Others say that the next two weeks will be an intense time of growth, a time to follow through on the initiatives you started in Virgo season and to cast off what no longer serves you. Still other sources say it's time to lighten up a bit and to embrace beauty and balance, to treat yourself (via shopping or experiencing art or otherwise), and to choose love over fear. So, pick your favorite interpretation and commit.

Self-care and horoscopes can be helpful for keeping you going day to day, but nothing makes up for professional healthcare. If you've been putting off finding a therapist, maybe now is the time to make some phone calls. Finding a therapist can be pretty overwhelming, but asking friends about their therapists can help.

As always, don't expect too much from yourself during this time. Yes, it's a time for reevaluation and change and deep inner work, but it's also a time for taking care of yourself and watching horror movies to your heart's content.