Tarot Symbols That You're Likely to See Everyday

Like all materials created for spiritual practices, tarot cards are adorned with many symbols and images that possess multiple meanings.

Some of those symbols date back to the original Tarot deck, which was created in the mid-1400s and was later redesigned in 1781 with an eye to divination and occult purposes.

To this day, people are creating new and resigned decks, but the symbolism and essential meaning of each card remains the same. Each of the 78-card deck has a variety of images that we often see in our daily lives, though we may not pick up on their deeper meanings. Here we're only highlighting The Major Arcana (the first 21 cards in the tarot deck) and using imagery and symbolism found on the Rider Waite deck (and illustrations from Ohio artist Lisa Sterle).

Noticing and understanding the symbols on each tarot card can help us better understand the journey everyone is taking in life. Each card symbolizes a stage we all are intended to experience (whether consciously or unconsciously). The Fool's Journey begins with the zero card, featuring The Fool (0), who symbolizes our enthusiasm for life and our desire to begin the spiritual journey despite not necessarily having the knowledge or tools to do so. Through the Major Arcana, The Fool grows spiritually and emotionally towards their life's purpose.

Through understanding their symbolism and its meaning, symbols associated with tarot can be recognized as friendly reminders from a Higher source.

The Magician & The Infinity Symbol 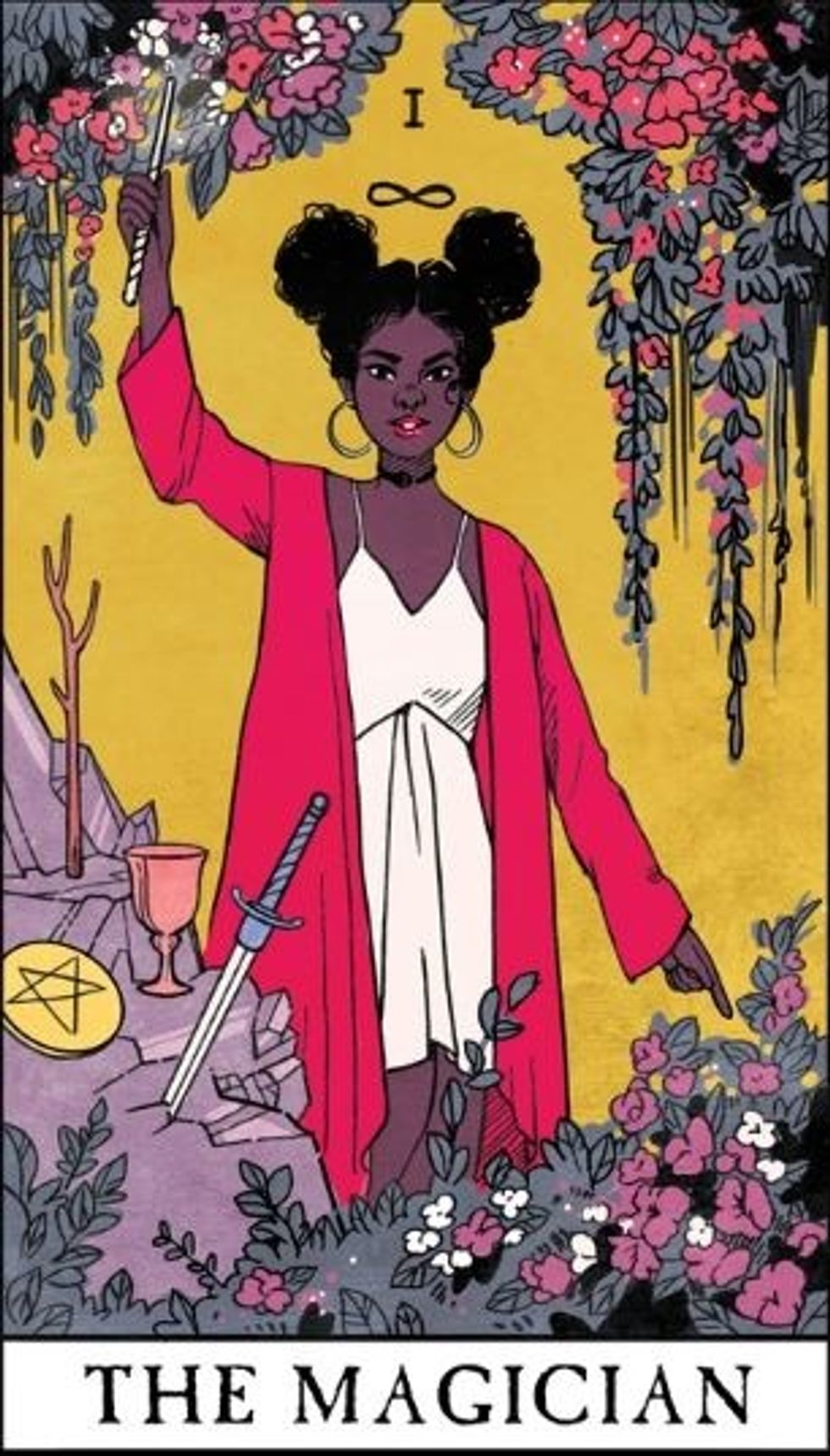 The Magician (1) follows The Fool card in The Fool's Journey. At the start of his journey, The Fool meets The Magician, the alchemist of the material world, who has all the tools needed to succeed. The Magician has an infinity symbol above his head. In pop culture, the infinity symbol has been reduced to a major piece of the "basic chick" starter pack requirement, but the symbol holds more weight than this. The infinity symbol is a mathematical and spiritual symbol that represents endlessness. While life itself does have an ending, our spirits live on forever. If seen in an unexpected place, an infinity symbol might be an unsolicited reminder to get back in touch with your spirit and find the balance between the material world (everyday life) and your spirit self.

The Emperor & The Ankh 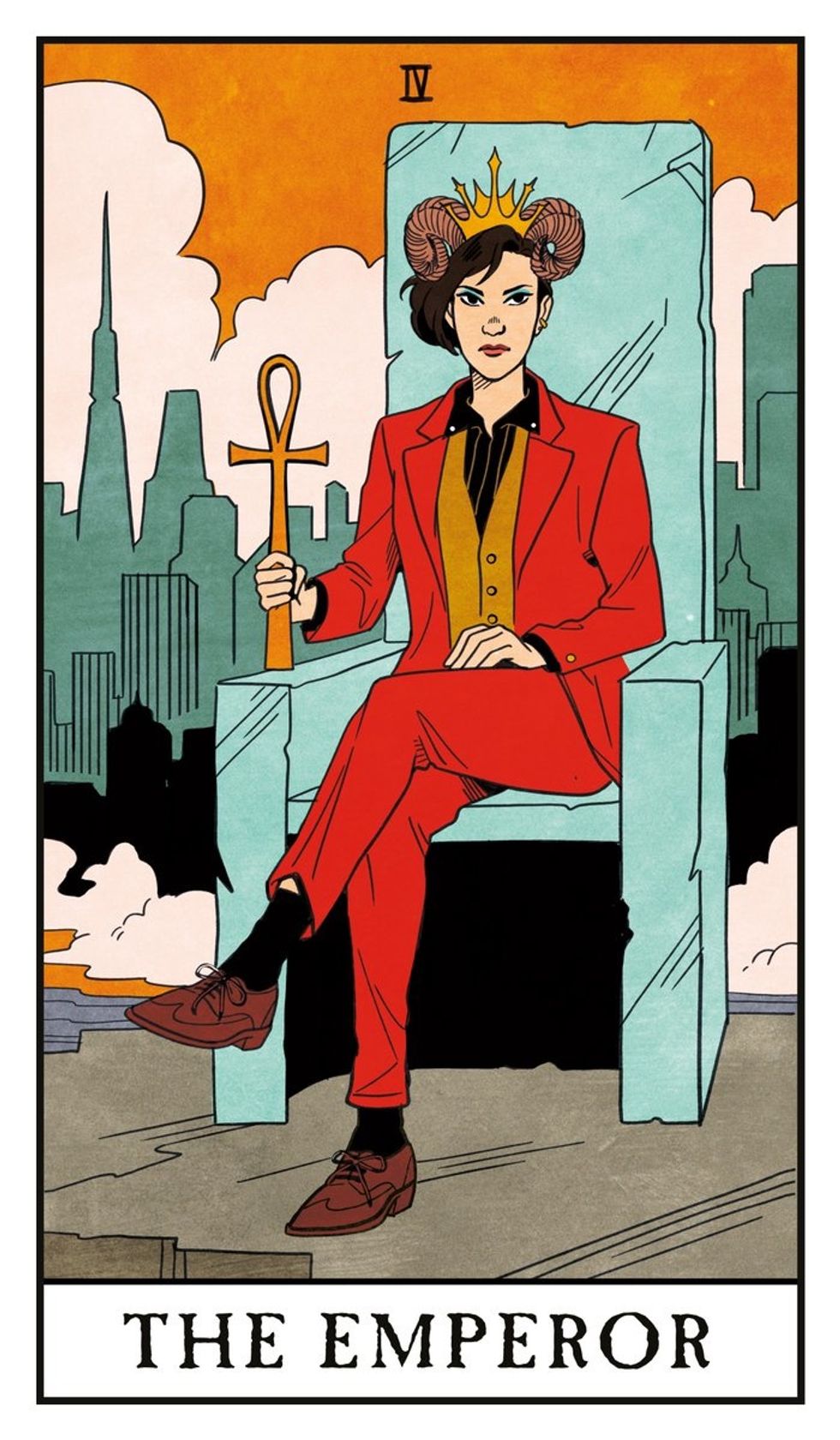 The Fool meets The Emperor (4) after The Empress (3), who represent fatherhood and motherhood respectively. The Emperor is shown holding a staff with a loop at the top of a cross, a symbol called an ankh. The ankh is now unfortunately connected to misogynistic-leaning Afrocentric memes on Black Twitter, rather than its original Egyptian translation, which is "to be at peace" or "I come in peace." Despite its current meme-worthy hilarity, the ankh is a strong symbol of continuity and inner peace. Take the symbol popping up on your timelines as a reminder of this.

Wheel of Fortune & The Hebrew Letters 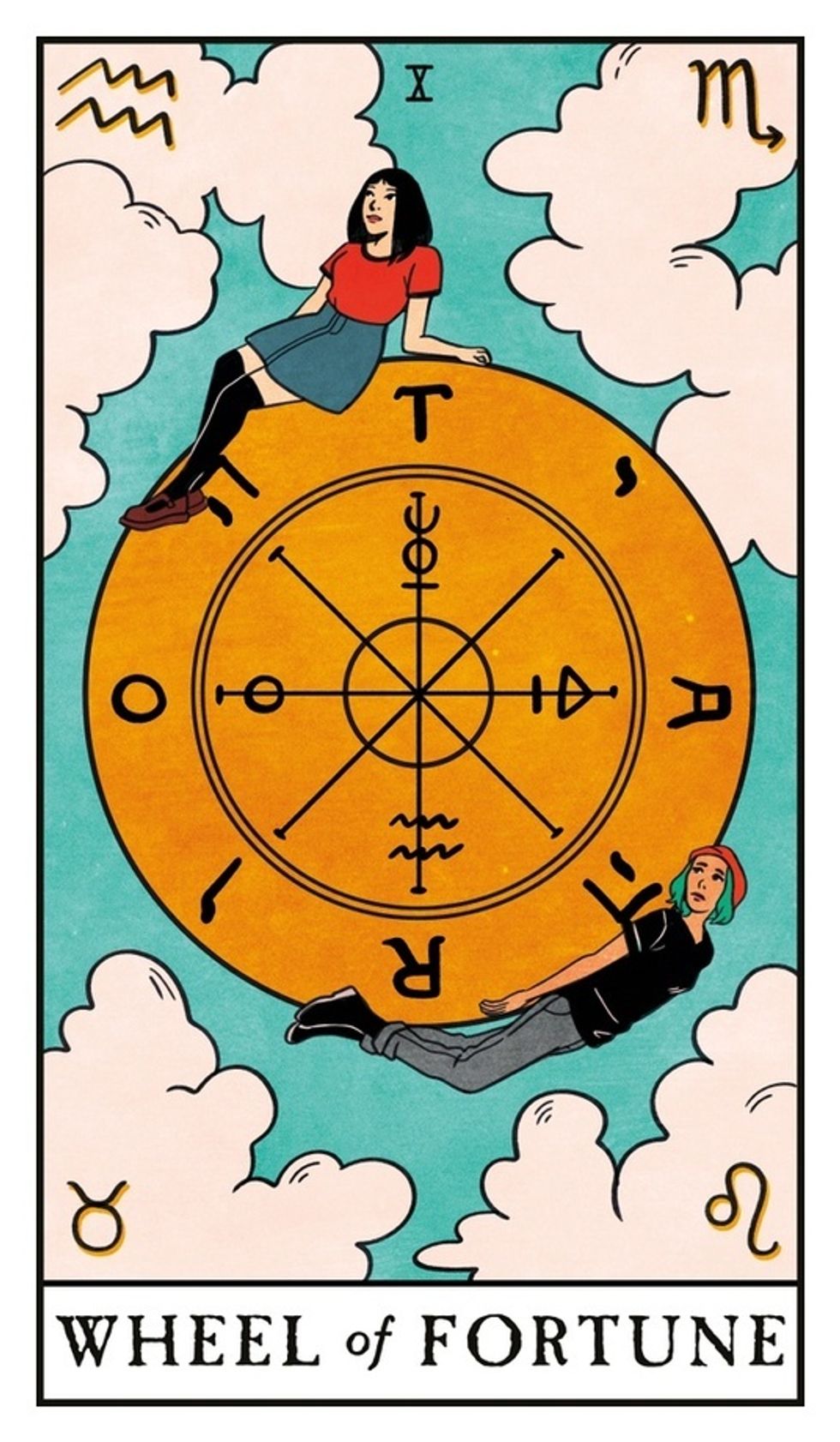 The Wheel of Fortune (10) comes at a changing point in The Fool's Journey. He is realizing that there is synchronicity and connectivity in all things, no matter how mysterious and unseen it may be, and he begins to understand that fate is always around the corner. The traditional Wheel of Fortune card has many symbols including an angel, an eagle, a bull and a lion (to represent Scorpio, Aquarius, Taurus and Leo), but the most noticeable are the markings around the wheel itself. The wheel has the letters TARO (if read counterclockwise, TORA) and Hebrew letters YHWH in between those. These letters translate to יהוה, in Hebrew, which means, "I am that I am." This phrase is less commonly seen in day-to-day settings than the other symbols on this list, but noticing any of the Hebrew symbols found on this card in public can be recognized as a sign of good luck. 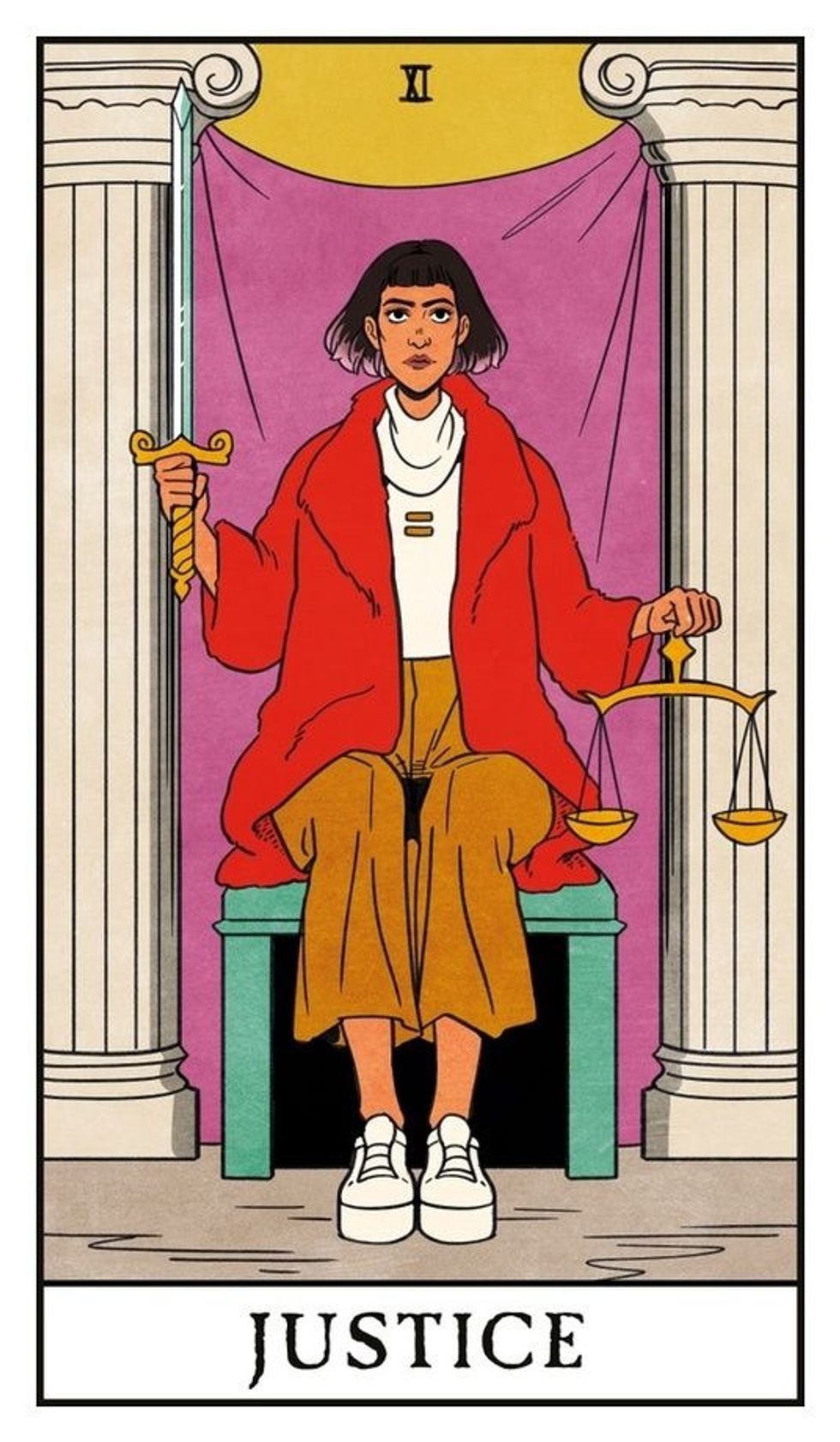 Following directly after the Wheel of Fortune, Justice (11) brings The Fool to a place of reflection, where he looks back on his life and has a choice to move forward or to regress to lesser awareness and previously entertained ideologies. The scales of justice are highly visible in our daily lives, if you pay attention. They often appear as indications that it's time for decision-making or change. If you see scales anywhere, take this as a sign of a fork in the road: what will you choose?

The Devil & The Vulcan Salute 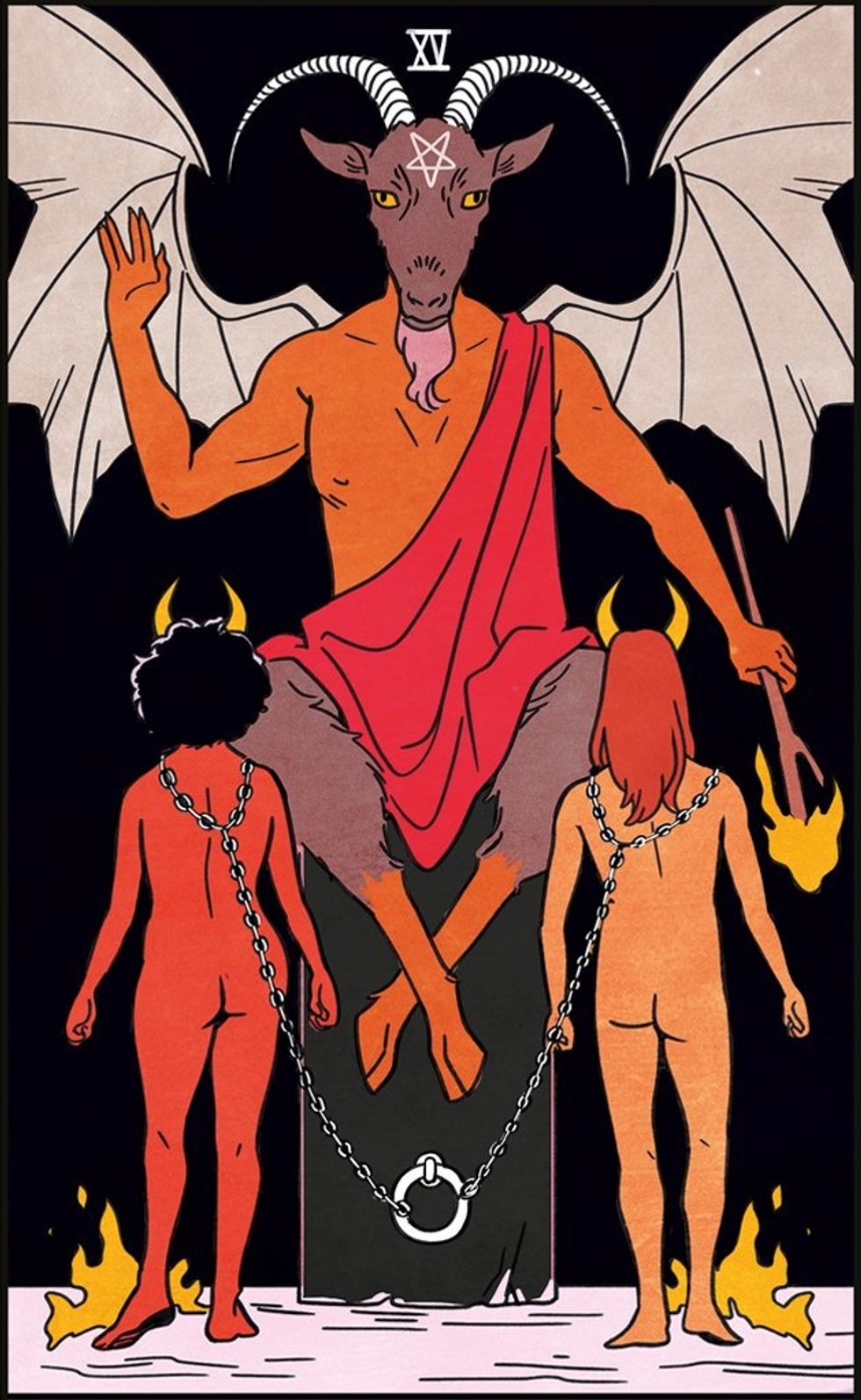 After The Death (13) card, The Devil (15) may be the next scariest symbol in the Major Arcana to non-tarot readers. It's a card that asks us to resonate with our innermost selves (just like The Fool), but it reaches a deeper, more subconscious darkness that's often connected to hopelessness and attachment to materialism, and entertains the side of us that enjoys lust and other vices. In most tarot card depictions, The Devil raises his hand to perform what is now known as "The Vulcan Salute." This hand gesture, with the ring and middle ring separated and thumb pointed out, has been widely recognized as the Star Trek greeting since its introduction to the franchise in 1967. Despite the symbol appearing on The Devil card, the Vulcan symbol is a sign of peace across pop culture and is meant to be viewed as such. If seen, take it as a sign to hold your inner peace closely during times of darkness.

The Moon & The Phases Of The Moon 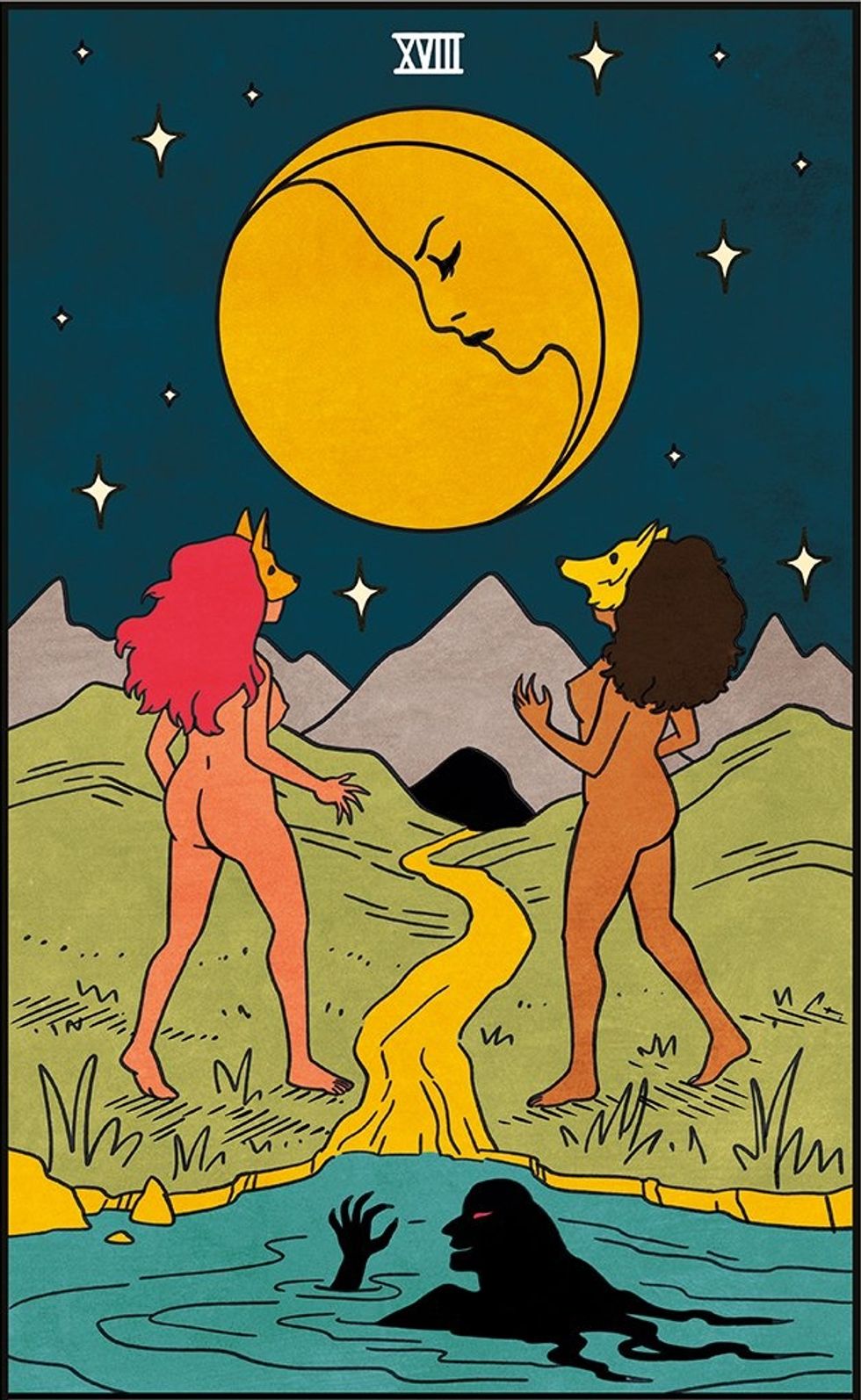 The moon symbol appears on many of the tarot cards in a traditional deck, but The Major Arcana Moon card (18) kind of sums up all representations of the Moon. As human beings, we are made of 70% water. Our planet's major bodies of water ebb and flow in accordance with the Moon. With this knowledge, we can understand that our bodies also move internally along with the phases of the Moon. This card, as well as our beauty in the sky, represents our subconscious, our hidden truths and our intuition. In many works of art (and on our reference deck), spanning from tapestries to tattoos, we can see the conjoined design of a Sun and a Moon. This shows the Moon's hidden nature in comparison to the Sun that shines bright at all times. With this understanding, we can see the symbolism of the Moon, whether full or normally recognized as a crescent, as a reminder to look inwardly and connect with the subconscious, digging deep to find what is being hidden and kept under tight wraps.

The World & The Laurel Wreath 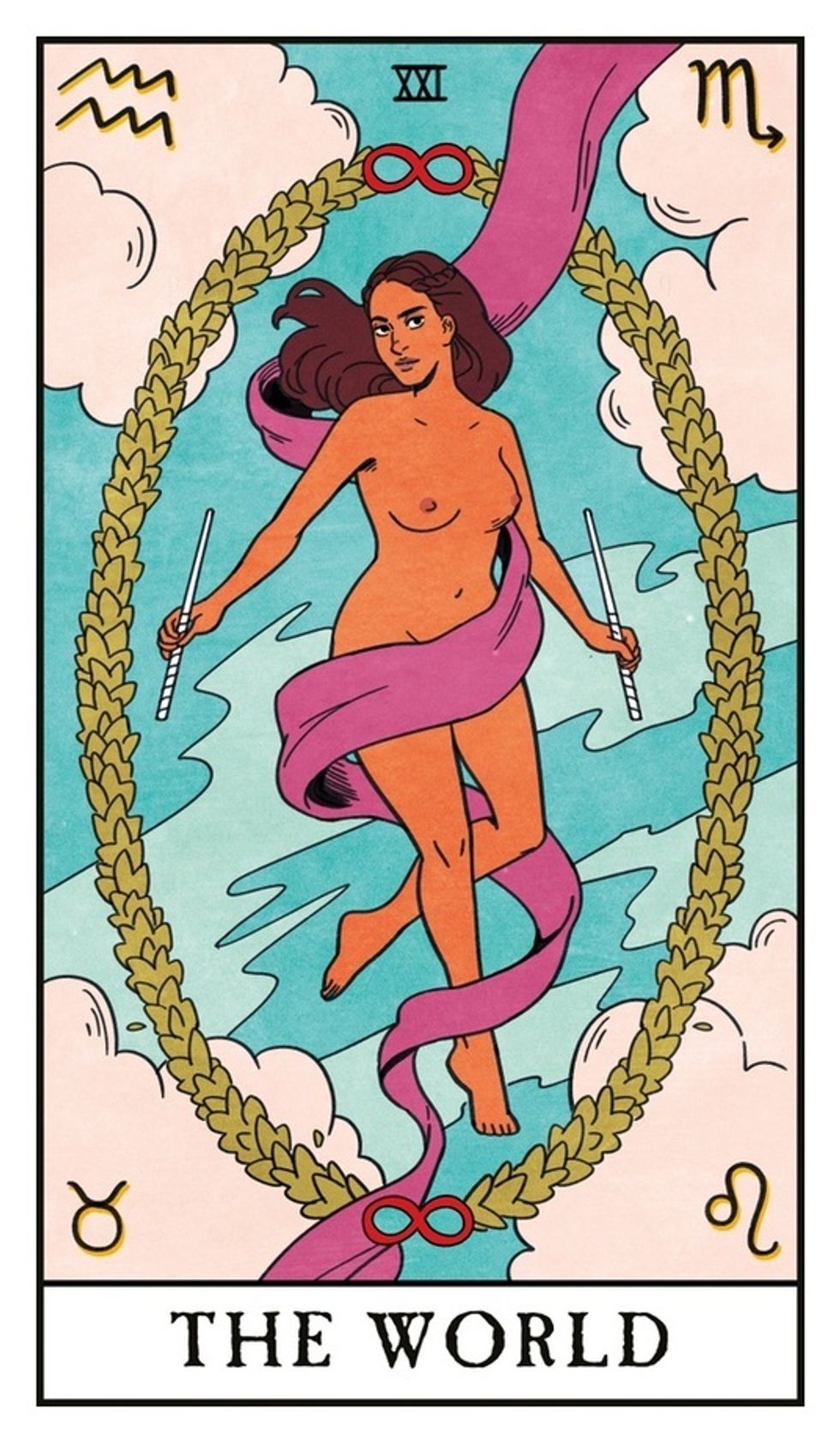 After being reborn in Judgement (20), The Fool is welcomed back into The World (21) fuller and more understanding of his place. He has accepted his personal calling and has chosen to be in and of this world knowing his accomplishments will be stacked in his favor. The World card is adorned with an enclosed laurel wreath made of branches and leaves. In ancient Greece and Rome, laurel wreaths were worn on the head of Emperors as a sign of victory and triumph. While they're not seen often on the heads of men these days, they can often be found hanging outside of the front doors of homes. If you notice one, see this as a Universal sign that you are on the right path and a win is soon in your future.

Relax: Here Are The Best Pajama Sets of 2023

From You, To You: The Best Valentine’s Day Gifts To Buy For Yourself

Save Money With Amazon Dupes Of TikTok’s Fave Products